Are you part of the Clubhouse? If not you need to up your social media gameplan.

You thought you have aced your social media game and mastered your way through the crazy maze. You are a pro at TikTok, have planned all engaging stuff for the Instagram reels, you are heavily curating or pinning on Pinterest on daily basis and writing some awesome stuff on LinkedIn frequently.

So here comes another one for you to start toying with. To add to your mix of super active online social life, and for you to juggle with. Welcome to Clubhouse!

The clubhouse is a free voice based-social media app, launched in March 2020 by Silicon Valley entrepreneurs Paul Davison and ex-Google employee Rohan Seth. Keeping the growth of audio in mind, which is reflected in the growth of podcasts and voice-based search, it's interesting to observe, how the platform combines the features of podcasts, social media, and audio chat to create something unique which is engaging, fun, and interactive.

With 6 million registered users, reportedly valued at around $1 billion following its latest funding round and the euphoria around it building up, as it piques interest in the celeb community, this unicorn startup is being watched closely by all.

It is presently an invite-only exclusive for iPhone users, giving it the hype, the clout, and the criticism from different sectors. The platform provides novel ways for content creators to engage and interact, through hosting rooms, listening to broadcasts, and be part of the desired community.

The exclusivity made it have its own niche followers post-launch, and with all the celebrity support like Oprah Winfrey, Drake, Kevin Hart, and Chris Rock who have been active supporters of the app.

But its demand went skyrocketed, soon after Tesla CEO Elon Musk appeared on the platform, on Good Time Show. 30% of the users joined within 10 days of this social media traction. 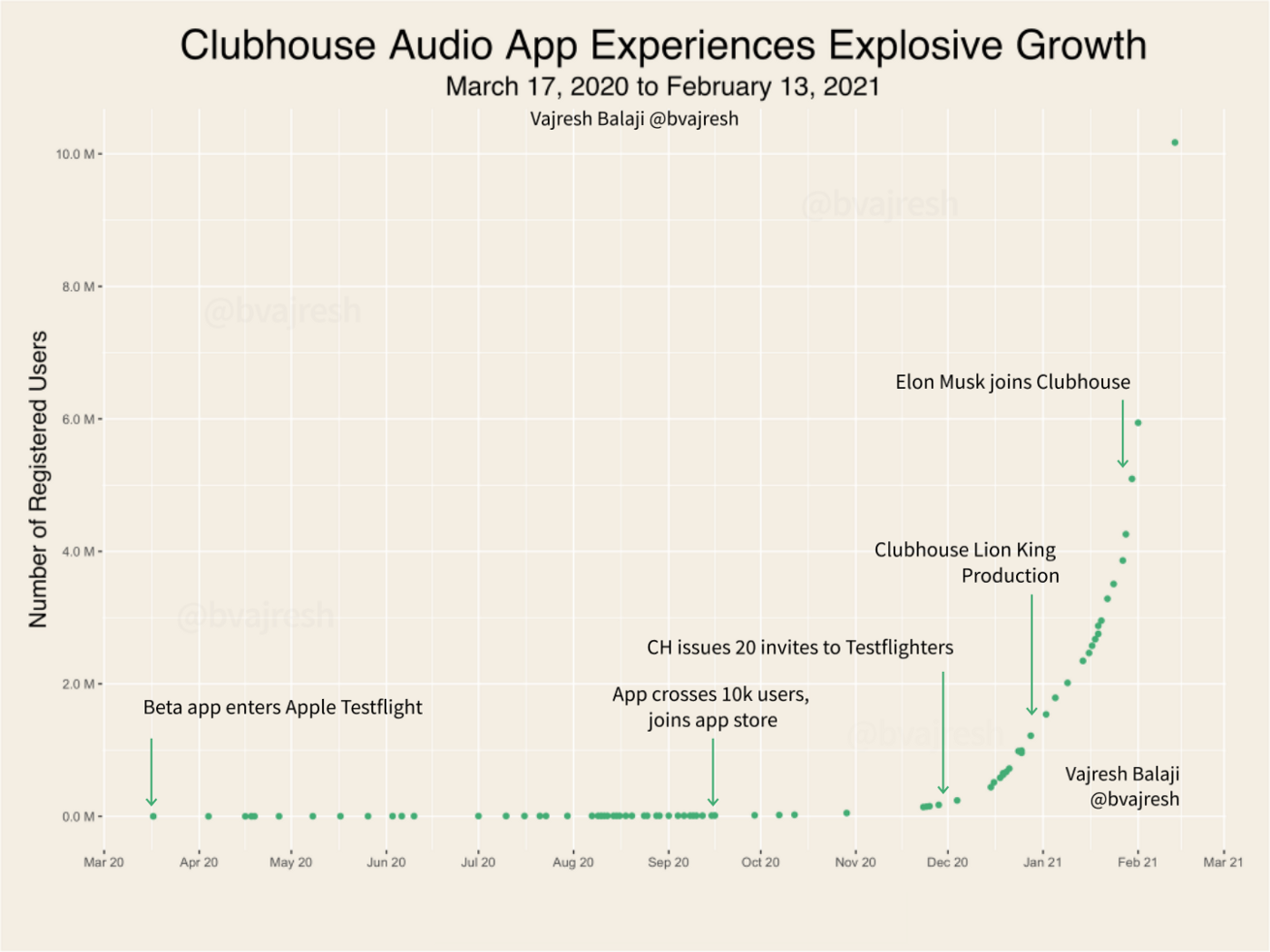 How does Clubhouse work?

The novelty of Clubhouse lies in its exclusivity, which might be limiting in many ways as well. Only a member can invite you to join and that too for now only for iPhone users. You can download the app, and try joining in but you will become part of the ‘waiting list’. So wait for your ticket to the exclusive club.

But as stated by the founders of Clubhouse, the app will eventually be open up for everyone, including Android users.

Once you get the invite and join in; you can select the topics and rooms that interest you and follow people like any other social media platform.

You can either join a room and join the conversation or create your own. Each room is moderated by a set of moderators who can select the speakers, while others can listen quietly. And like zoom, listeners can ‘raise their hands, to be unmuted by the host to become part of the conversation.

One interesting difference is that you need to join the conversation live since the conversations aren’t saved; unlike Facebook and Instagram. The real-time feature pushes people to spend a long time on the app, as FOMO trickles in and builds the curiosity to be part of the club's chats’.

The interesting format of the rooms makes it like being part of a semi-formal business conference, wherein you can listen to the thought leaders’ or like catching up for coffee & drinks, post the business conference to chat over tech, business, and world politics. Think of LinkedIn with voice chatting. But as the app grew the diversity of users and discussions also grew.

Now you can see discussions ranging from bitcoin, to pop to meditation and parenting. And with an amazing endorsement from the Black community, from Kevin Hart, Drake, Tiffany Haddish, and many other social media stars joining the bandwagon. *Haddish was the first person to break 1 million followers on Clubhouse, accounting for the support from his fan base.

The app also causes major positive disruption, as you get welcomed by a Black face with guitar as the app’s face on the app store. Bomani - or the face on the app, is an artist - a Black guitarist, singer-songwriter, and celebrity digital strategist who has worked with Jill Scott, Nicki Minaj, Lil Wayne, Wyclef, and more. With this clever move,  Clubhouse has surely won many loyal followers in the Black community.

At the early stage of its app cycle, as Clubhouse is evolving; it also has been facing its own share of controversies and brickbats. Due to unclear moderation policies,  lack of safety policies, power play with incidents of bullying, the app has come under the radar by the social police.

The unfiltered chats on the socio-political scenario of China soon exploded to come under censorship - https://www.nytimes.com/2021/02/08/world/asia/china-clubhouse-blocked.html.

But these speed breakers are not dampening the spirits of the millennials who love to try and experiment with tech and engage it in newer ways. Especially for an app that is getting all the celebrity endorsements and investor support.

We will have to wait and see if the app fizzles out like many other of its counterparts or will take a permanent place on your mobile screens. Till then ‘Drop-in for an audio chat’.

Pandemic has effected the brands in different ways. Read thi...

Read
Brand Films Vs. Promotional Films: Where are Marketing Managers Investing Their Capital?

Read the article to understand the difference between brand...

Read
NFTs in Marketing: What you should know

NFTs are digital assets that can be sold and purchased like...

Are Stories the Future of Online Marketing?

Read this blog to understand how story feature in social med...

Read
7 Digital Marketing Trends to watch out in 2022

The market trends, strategies, decisions are always on the v...

Read this article to understand how AR technology has helped...

The Beginner’s Guide to Programmatic Advertising

Advertising and marketing are an important ladder for any bu...

AMP stands for accelerated mobile pages is an open-source co...